What’s Next for Chris Johnson?

The Tennessee Titans officially released running back Chris Johnson on Monday. While DeSean Jackson is being wined and dined around the league, Johnson’s future is uncertain. The 3-time Pro-Bowler didn’t have a great season last year, averaging only 3.9 yards per carry for a total of 1,077 yards and 6 TDs.

Johnson tweeted about his release on Friday, “I’d like to thank all of my teammates, the fans, the staff and the coaches who have supported me throughout my journey with the Titans. I have grown so much as an individual and as teammate over the past few years, and I am excited about the opportunity to bring my experience and talents to a new organization. I’m looking forward to the next chapter and can’t wait to contribute to my new team.” #JUICE

He’s a consistent starter – having missed only one game in his career, and that was way back during his rookie season. He’s a workhorse, staying on the field and getting the ball about 300 times every year. Few running backs can make that same claim.

The good news is that the man known as CJ2K did pass his Titans exit physical. In January he underwent knee surgery to repair a torn meniscus. According to NFL Media Insider Ian Rapoport, a source close to Johnson said that he might fail the physical and that he wouldn’t technically be ready to go if the season started today.

However, none of that has affected both his popularity and his value in the Jockbrokers Pro Athlete Market. In fact, his per share price has climbed steadily since he entered the market last year. In August 2013, his IPR (the Jockbrokers equivalent of an IPO) immediately valued him at $25, but his value has steadily climbed, and in February (yes, even after football season was over!) he received his latest bump to $33 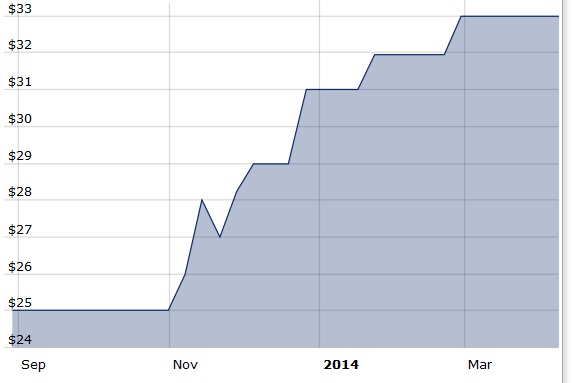 The reason is clear. Chris Johnson has generated a lot of buzz within the Jockbrokers community. He has already earned a guaranteed Hall of Fame buyback. If he gets picked up anywhere, by any team, and he gets on the field at all, his bonus amount will only go up.

Here’s how it works:

In his career, CJ2k has racked up 9,968 total yards and 58 touchdowns. That qualifies him for Level 8, a $20 Hall of Fame buyback bonus – even if he never steps on the field again.

The star running back is likely to find a home this season. The New York Giants, the Cowboys, and the Jets each seem to be showing at least some interest.

When he gets picked up,  even if he has to share the workload – all he will have to do is pick up a mere 32 yards (rushing OR receiving) to instantly jump his bonus up to a Level 7, guaranteeing the owners of his shares a $30 buy back.

This is better than fantasy football. Jockbrokers is the only place that real people can buy and sell shares of professional athletes and legally make real cash profits. When Chris Johnson gets another starting job, and even if he performs below his own average, he’s going to earn monthly and seasonal cash bonuses, all the while guaranteeing a real cash profit to the people who own his shares in the Jockbrokers Pro Athlete market.